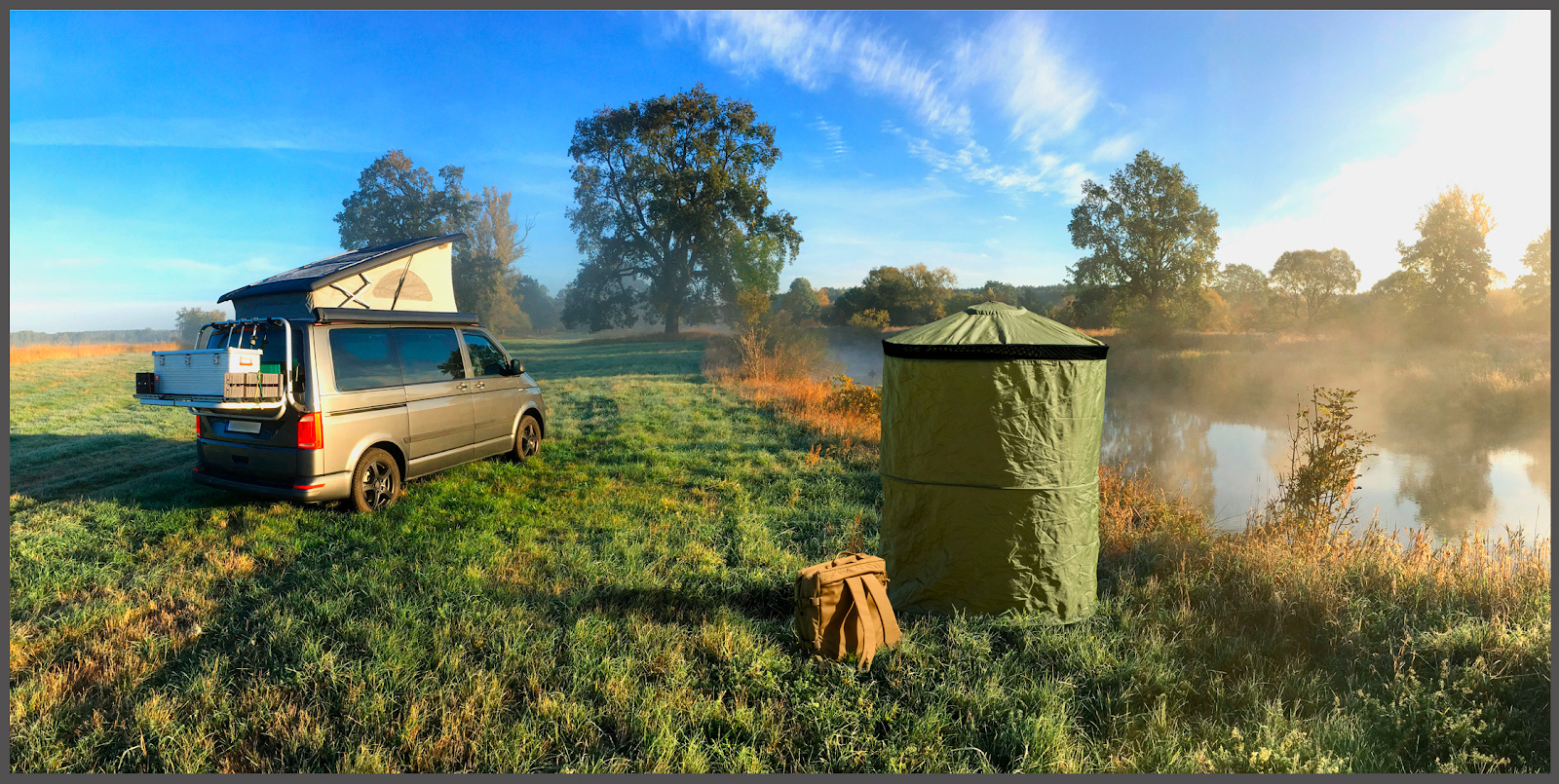 In early 2019, Murie Design Group’s CEO, James Albert and Vice President of Business Development, Mac Christian took a trip to Las Vegas for a trade show. What started out as a week of networking in the firearms and outdoors industry, ended up as a worldwide social media campaign for an outdoor toilet and privacy system and one heck of a story.

James and Mac spent the first two days of the SHOT Show chatting with various Idaho-based companies who have a substantial representation at the event. It was at the New Product Showcase, displaying everything from new firearms inventions to innovative clothing, that they crossed paths with Paul Mangum, the inventor of the InstaPrivy. As Mac Christian put it, “We walked by the InstaPrivy and initially, we kind of chuckled it up. A toilet wasn’t something we expected to see. Once I gave it some thought though, I realized I had never really seen anything like this product. This was something that really seemed to be disruptive and we decided to see how it worked. We grabbed Paul’s contact information and proceeded to peruse the rest of the show.”

A few weeks later, Mac gave Paul a call to chat and learn more about the InstaPrivy. Through this initial conversation, he learned that Paul had a full patent and was in the early stages of launching his product. He was trying to get a foothold with big box retailers but also needed to build an inventory in order to sell to them. Paul found himself in the same position that a lot of product inventors find themselves, needing funding. While Paul needed capital for his venture, he did not want to give up decision-making authority, which is often the case with private investors. After a series of conversations it was decided that crowdfunding was an appealing option because it would allow Paul to retain control of his product. He had attempted a Kickstarter campaign the previous summer but it did not gain as much attention as he had hoped. Murie Design Group felt confident that they could gain attention through social media and pitched the idea to Paul.

Advertising can be expensive and the same funding issues that arose with building inventory was a problem in paying for a marketing campaign, capital. Murie Design Group has a soft spot for startups and wanted to find a way to help Paul to get his product launched. Murie Design Group put their money where their mouth was and directed the fundraising effort, capturing a small percentage of what was raised for compensation.  This would protect the founder from costs if the campaign was unsuccessful and reimburse Murie Design Group if the campaign was a success.

Through competitive analysis, Murie Design Group assessed that video production would have to play an intricate role, as it had for similar products in the outdoor industry which had funded successfully on platforms such as Kickstarter and IndieGoGo. Paired with low budget specific targeting through social media ads and consistent updating of social media accounts, the team felt that they could encourage mass appeal. “We felt that InstaPrivy was a great product with a high probability of taking off if promoted. It just needed the right presentation and platform to appeal to the right audience,” said Murie Design Group CEO, James Albert. “We knew we didn’t have much of a budget so we decided to invest in one high-production-value pitch video with the rest being produced with self-shot footage.”

Murie Design Group assembled a multi-faceted effort for the InstaPrivy campaign based on affordability and getting the most out of every dollar spent. Their strategy was to use videos, social media graphics, a website update, and the construction of an IndieGoGo page for the campaign where all of the videos and social media graphics could be leveraged.

The goal for the pitch video concept was to create a piece that encouraged sharing and the Murie team went for amusing with a high entertainment value. Using the term “viral” is a bit cliche because everybody wants their content to go viral, but that was most definitely the intent in this case. Murie chose a parody based on pharmaceutical television commercials, an idea put forth by then intern Tara Vetsch. Mac took over script writing and storyboarding. To keep costs low, Mac and his wife, Rachel Christian were selected as actors.

The week of the shoot, the InstaPrivy founder flew to Boise to participate in the Murie Design Group’s videos. From Boise to Idaho City, locations for the shoot were scouted and additional footage was shot ad lib with handheld cameras. Ultimately Kathryn Albertson Park, a city park located near downtown Boise, was chosen as the best fit and also happened to be the closest location to the Murie Design Group offices. While Paul was in town, an interview was recorded to be cut up and assembled into various informational pieces and the team also took the opportunity to shoot product photography of the InstaPrivy prototype.

While some members of the Murie Design Group team were focused on video production, others provided design elements and Tara took over creating new content for social media. Tara played an integral role for the project by pushing content through Facebook, Pinterest, LinkedIn, Instagram, and Twitter. It was important to develop a presence on these platforms before releasing ads in order to provide readers with information when the ad campaigns were launched. The content that Tara assembled on social media started to make an immediate impact.

In the one week with Paul and the InstaPrivy prototype, most of the footage for the campaign was shot. Due to the frantic pace, some ideas were shot, scrapped, and the footage was used on other ideas. The extra footage became a palette that the team could pull from at any time to create new stories. Mac spearheaded the ad placement strategy for videos and James jumped into strategic partnerships with publications for outdoors as well as RV groups. These publications were scouted by the team as likely locations for potential consumers.

After a month of preparation, it was time to launch the campaign. Initial pushes were made through paid advertising on Facebook and Pinterest, selected for their exposure to likely consumer audiences as well as for their affordability. Again, the budget was small and these platforms allowed for inexpensive campaigns to be run with AB testing (running campaigns side by side with a single variable to test effectiveness). The team was anxious and expectations were high but realistic.

Something funny happened a few weeks into the campaign. The intuition that James and Mac had regarding the product as well as the humorous videos that were assembled ended up being spot on. Cheddar, one of the publications that Murie reached out to, released a video showcasing the InstaPrivy. It gained over a million views in only a few days which led to other publications such as Unilad, Daily Mirror and Fox News releasing similar videos. Other publications followed and further articles were posted by GearJunkie, VanClan, and OddityMall (Click the links to read these articles).

The amount of traffic as well as consumer engagement was immense. Within weeks the product had tens of millions of views and thousands of comments. One surprise was discovered after ads were run internationally and viral publications started to reach a world-wide audience. European and emerging market interest was huge. Unfortunately, the supply chain was not established to ship effectively to foreign markets and the team decided to focus domestically for the immediate future. Units began to sell quickly and weeks before the campaign ended, the established goal had been met. Since that time, the original goal has been lapped, providing almost double the intended funding.

Social media ads were funded in $32 weekly sprints which is but a small fraction of a typical campaign. Videos produced in-house from the original shoots and reassembled into new storylines were extremely affordable. The pitch video, produced by Villager Creative, which served as the primary visual for the campaign utilized free actors, saved on additional cost by developing the story in-house and finding easy local locations for the shoot. Villager Creative owner Doug McFerrin was highly accommodating in this aspect, helping the team with cost saving ideas and giving his input on the shoot. James used a mix of product photography and stock photos to create compelling messages and images in a cost effective manner. Tara supplied a constant stream of content for social media which not only saved on overall cost, but as an intern, gained her the experience of spearheading a national campaign.

The entire campaign was extremely scrappy. Each element produced required significant brainstorming on how to produce material affordably, how to be time efficient, and how to uphold the high level of quality which Murie Design Group puts its name behind. The results exceeded all expectations.

This was not a typical campaign by any means and it required a significant amount of trust and collaboration. For Paul Mangum and InstaPrivy, dreams and livelihood were at stake. For Murie Design Group, putting in the time carried with it significant risk should the campaign fail, leaving the team unpaid for their work and time put in. While not typical, this type of campaign is something that other entrepreneurs can try and is a testament that anything can be accomplished with the right partners.

The results of the campaign speak for themselves:

Though, not every campaign goes viral, the InstaPrivy video was a combination of scrappy execution, clever content, and an innovative product. For information on crowdfunding or graphic design execution for your company or project, reach out to marketing@murie.com.

Founded in 1988 by Mike and Christi Murie, we are a creative design and marketing agency. From our humble beginnings as the agency of record for Smith Sport Optics, we continue to expand our clients to include a diverse group of local, national and international organizations.